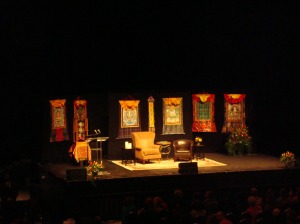 The Dalai Lama came to town on Saturday and 7,000 people filled the stands at the Civic Center.  I had my typical and very individual response to seeing him; 6,999 others did too.  In sangha, I shared what my responses teach me when I feel a deep emotional surge to the presence of  people like the Dali Lama.  I’m grateful because it means I’m still human.  It means I haven’t fallen into a cynical, skeptical, hyper-rational dismissal of all that’s possible, a reaction easily triggered by the industry of the celebrity-teacher.  As we explored together this difficult edge of discerning the celebrity-teacher from the buddha-dharma, it seemed we all had a healthy resistance and fear of becoming celebrity-teacher groupies.

That being said, what is wrong with having celebrity-teachers in our spiritual universe?  At one level, it’s an entry point for those who need the magnetizing effect of a bright star to begin their practice.  And yes, there will always be those who need to position themselves as part of the constellation by their language: “I was trained by Thich Nhat Hanh” is one of my favourites.  Oh let’s be honest, I envy the hubris of such folks who not only speak it but can put these claims down on their websites and resumés.  But that’s a sidebar and different soap-box of mine.  Celebrity-teachers also bring awareness and galvanize support for important causes as does the Dalai Lama.  They offer hope for the possible end of suffering as does Thich Nhat Hanh.

So what’s the down side?  Well, we become disillusioned with our stars when they don’t meet our needs, when the time they require to forward their cause interrupts the time we want for our personal cause.  I will admit to feeling a bit put upon as the videos and calls for action went on and on at the show on Saturday.  As an opening act for the Dalai Lama, I would have preferred to have been called up to the stage to dance with Richard Gere.  Yes, it’s true; in the battle for self or others I am easily comprised by a pretty face.

Another downside is that we become needy; we want to be the one who is in that inner circle, protected from the danger of remaining one of the unwashed masses.  I will fully admit to pangs of jealousy when four people got their white scarves blessed by HHDL and I didn’t.  As we exited the arena, it struck me that I personally wasn’t selected for the neglect; there were 6,996 of us who were teeming out sans white scarf and looking quite radiant and joyful regardless.  In a less humorous vein, I’ve spent years coming to terms with the capricious nature of being part of an inner circle and am only too happy to be well-distanced from the cloying stickiness of that mess.

And, likely the most difficult of the downsides is the confusion we feel when we are taught that the dharma is based on the concept of no-self and we find ourselves caught in being defined by the celebrity-teacher-star with whom we are aligned. In this I am grateful that I haven’t run into anyone calling themselves a Dalai-Lamarian or a Thich-Nhat-Hanhian but I’ve certainly had to struggle with the “Do-you-know-so-and-so-ians?”  The question is rarely about sharing the wisdom of the celebrity-teacher as it is about the lift in status it gives to the person asking.

These are challenging dances yet compelling because the natural need to feel connected can mask the natural need to compete for safety, identity, and nourishment.   And they are made all the more painful and dangerous when the celebrity-teacher is more celebrity than teacher, reducing the system to drama and not Dharma.  That’s a far more complex discussion.

For now, how do we resolve this approach-avoidance we can feel about teachers like the Dalai Lama who occupy such a bright place and exert a powerful pull in our spiritual universe?

The unattainable celebrity-teacher is likely the best teacher we can have in this age of name-dropping and aura-clinging. The immense social light-years that stretch out between the giant star of such a teacher and my little social asteroid is important in understanding the ultimate truth of the dharma.  When they teach, they speak to the ultimate aspect of life, to the guiding North Star.  Practices of generosity, compassion, love, and so on are held up in a clear light which can be supportive.  We can see the template for cultivating our practice and feel encouraged to persist despite the never-ending re-visitations of old, painful habits.

At the same time, with our bent for doubt, we also can feel challenged by the lack of street creds in someone who may never have had to struggle with work, family, bills, and in-laws.  This too is a teaching; it is a litmus test of the celebrity-teacher’s capacity to span those light years between us and place a gentle, acknowledging hand on our struggle.  When the Dalai Lama answered a question about raising a compassionate child, his answer was text-book with a nod to the sensorimotor theorists.  Then, as would a speaker wise to Western skepticism, he said (I paraphrase): “What do I know?  Unless I stop being a monk, get married, and have children, I don’t know what to do with a child.”  To which I wanted to cry out, “Accomplishing the first two is still no guarantee!”

But in the end, I prefer that the celebrity-teacher, since we have them, stay unattainable, untainted by the mundane of our lives.  I prefer that they keep their eyes fixed on the luminous nature of the Dharma and trust its application to those of us grounded in the practice of living with ourselves.

9 thoughts on “celebrity-teachers and the lessons they teach”