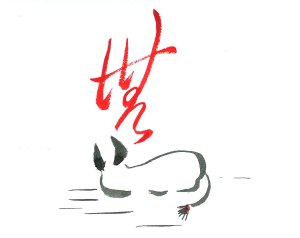 Anything I write about myself seems unimportant in the context of a boundless reality – not to mention that any story about my Self would be quite tainted with my inexhaustible and untransformed delusions.  I love to write but I don’t take the time.  I love to take photographs but I don’t do much with them.  I love to practice but I tend to drift into intellectual backwaters and whirlpools of thought.  There are no transmissions I can claim nor great realizations.

I’m just a practitioner who struggles with all the same things every human does.  And this blog is just another way to practice.

A long time ago, in a moment of angst, I wrote an email to a friend.  That in itself is not noteworthy because I tend to (1) be in angst a lot, (2) write emails to friends, and (3) do both.  The difference was that this email was all in lower caps.  I was, in fact, copycatting my Taoist friend dave who liked to write that way.  He often said it was pointless to live from the small-i ego unless you embodied it in every moment.  dave could also take a vacation in one sip of his coffee.

But the friend who received my email had a different lens and insisted I use the shift-i because i needed to state clearly that I mattered.

The I which practices Right Livelihood as best she can is a psychologist, engaged in various ways to create space for the individual’s intimate truth to emerge.  Buddhist practice informs my clinical approach and blossoms in the Mindfulness Clinic where my partner and I enjoy sharing our practice with class after class of incredibly wise beings.

I often say I’ve been practicing Buddhism for 30 years.  That’s debatable – and has been.  How do I count when practice actually begins?  I don’t.  But sometimes I have to when it’s a metric for belonging.  Thich Nhat Hanh says there is no beginning, no ending, no coming, no going.  That gets me off the hook.  I’ve been part of a number of traditions:  a Tibetan tradition (9 months), Zen in the lineage of Kapleau (commuted 4 hours for a year), and 9 months with a weird Zen group where I wasn’t allowed to talk to anyone anytime and the godo told me to stop flicking my eyes in dokusan.  Eventually, I found my way to Thich Nhat Hanh and discovered a practical and user-friendly way to live.  It’s been like coming home.

My partner and I are lay ordained members of Thich Nhat Hanh’s fourfold community and used to lead a sangha which is a realization of a way of practicing.  We were also an Upaya Sitting Group, under the guidance of Roshi Joan Halifax, Abbot of Upaya Zen Center in Santa Fe NM.  I completed the Buddhist Chaplaincy program and volunteered for a while as the Buddhist Spiritual Coordinator in a major hospital.

Another among my meditative practices is a ragged dance with the Japanese brush, shodo.  My very Japanese teacher used to cringe at my efforts and plead, “Pray with the brush, pray!”  It took me a while to realize she was saying, “Play with the brush, play!”  By then it was too late.  I had fallen into a fundamentalism about grinding black ink and collecting exotic brushes.  Some of my brushwork (cropped smartly) will occasionally be flung into the posts here  – as will some photoartography.

Actually, shodo practice lead me to Upaya Zen Center on what I thought was a 5-day workshop with Kaz Tanahashi whose calligraphy retreat I had attended at Zen Mountain Monastery.  It wasn’t a 5-day calligraphy workshop but a 5-day sesshin on Dogen.  I had never been to a sesshin let alone one that required oryoki. I survived.  A lot of other things didn’t.

Practice now is very simple: Make the choice in every moment to be as skillful as i can be.

I hope you enjoy my peripatetic directionless wanderings and share your thoughts and teachings in the comments sections of the posts.