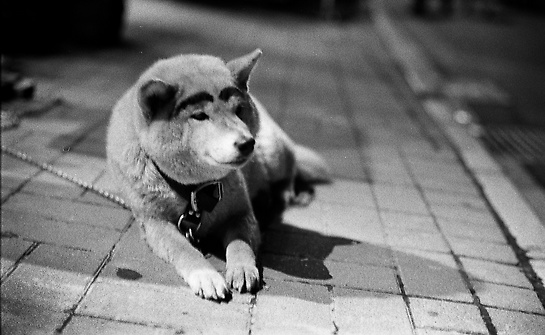 Dark and light meld in this revelation of the Truly true story of Hachiko the faithful dog.  I had no idea that there was a sadder version (Oh!  Could there be a sadder version?!)  I knew I had to share with you this wonderful historic drama that sets the original story straight!  Here is an excerpt from Zokyo: The World According to Zebrio:

Almost any Japanese person can recount the story of chūken Hachikō, (忠犬ハチ公, “faithful dog Hachikō”,) Japan’s most beloved dog and national symbol of loyalty, honored for returning everyday to Shibuya’s bustling train station to wait for his master’s return, even long after his death. Few, if any, know of or are willing to acknowledge the pup’s miscreant sibling, taida na Pachikō. (怠惰なパチ公, “slothful dog Pachikō.”)Born in November of 1923, “Hachi” and “Pachi” were two pups from a litter of seven, born on a farm near the city of Ōdate, Akita Prefecture. Their owner, Hidesaburō Ueno, a professor in the agriculture department at the University of Tokyo, adopted the pair and brought them back to Tokyo, naming them after the Japanese word “hachi-pachi,” used to describe the sound of popping bubble wrap, a new and popular pastime in 1920’s Japan.

As pups, the dogs were identical, but as they aged, Pachiko grew dark distinguishing eyebrows, that according to historians, later inspired Japan’s bushy eyebrow craze that has yet to come out of vogue to this day. With his distinguished eyebrows, Pachiko soon gained the favor of Professor Ueno as the more clever of the pair, who later remarked in a letter to his wife, regarding all night vigils at the station by the less adroit Hachiko while the professor was away on lecture tours, “You must be kidding! That idiot dog Hachiko waits overnight for me at the station?”

To read the rest of this amazing tale click here.

Thank you for practicing so diligently!

8 thoughts on “pachiko – the other tale”