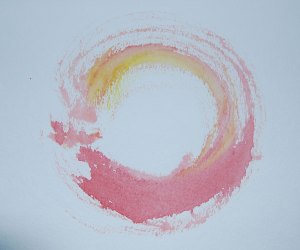 Another snippet from Glassman’s talk in reference to cooking up the Five Course Meal (see Instructions to the Cook by Glassman & Fields).

In fact, there are often ingredients in a mix that we are not aware are there – or how they are adding to the flavour.

One example that was discussed extensively was of a village to which a developer brought indoor plumbing.  As a result the well, which was the community gathering center, fell to disuse and the subtle ways of communicating between villagers ruptured.  The bonds of the community were based in the gatherings and sharing that emerged from those meetings around the well.

By the time the impact of rip in the social fabric was understood, repairing it became a dilemma.  What do you do?  Tear out all the pipes and cisterns in each house?  Build a community center?

The paradox in the koan is only in its construction, in how the story is told.  There are unknown and unknowable ingredients in each shift of the story.

Can we only know them in retrospect?

Back to this demon, Hope.

Zen Peacemaker Bernie Glassman taught an entertaining and engaging retreat at Upaya on the Oneness of Life.  The entire two and a half days was an extravaganza of history, story telling and Zen Zingers interwoven with luminous descriptions of Indra’s Net and the beginning of the world as we not-know it.  I admit I’ve had some interesting preconceived notions of Glassman who has always struck me as the enfant terrible of the Zeniverse.  And thus he is – in part.  With a lot else.  Radical, no-nonsense and relatively intolerant of ego-centered questions – an interesting mix which seemed to elicit fascinating projections from the audience.

Things trundled along fairly well, as much as an experiential process does when lead by someone with half a century of practice, until Glassman offered his view of expectation and hope.  My notes are not illuminating but I recall his terminology got us all in a melee trying at once to convince him out of his definition and impress him with ours.  With no disrespect but it really is futile to fight delusion with delusion – which is what definitions end up being when we cling to them.  To give Glassman some credit though, his Socratic jiu-jitsu deftly threw us back onto ourselves and that in itself was a teaching.

However, not to be out-done by the moderately deluded, I entered the fray to prove how thoroughly deluded I can be.  Commenting on the process we seemed caught in drew a long blank stare from him.  Or maybe I had hit the pinnacle of Zen insight and he didn’t know what else to do with me.  It was worth the fleeting expanding of my ego before my anxiety kicked in and I blathered on about T.S. Eliot’s East Coker.

Glassman had defined “hope” as “being of the present,” as something he offered as “an expression of the love of all things.”  It only “makes sense when there is no self involved,” a “bearing witness which allows (him) to say it makes sense to make the four vows of the Bodhisattva.”  (I told you my notes don’t help!)

People in the audience leaped to re-define it as an aspiration, a desire, a wish – all of which he rejected with a twitch of an eyebrow.  I bravely suggested that his definition ran counter to Eliot’s lines in East Coker;  it was challenging me to re-think the idea of “Hope,” I opined.  In fact, I forged on in the throat-closing silence, his concept of hope seemed to be close kin to the Metta Sutta.

The what? he asked.

I gave up hope.

And maybe that was what he intended for all of us.  Stop messing with the concept and sit with not knowing what the heck it means.  And then see what arises as skillful means.

I don’t know.  Maybe.  Or not.  Only the Shadow knows when it comes to Zenmeisters.