One of my favourite quotes is from T.S. Eliot’s Four Quartets – East Coker III:

I said to my soul, be still, and wait without hope
For hope would be hope for the wrong thing…

We spent a number of days in Saranac Lake working at the site of what used to the Adirondack Cottage Sanitarium begun by Garry Trudeau’s great-grandfather, Edward Livingston Trudeau, who was a physician; Trudeau, of course, is the creator of the comic strip, Doonesbury.  The elder Trudeau suffered from Tuberculosis and, believing he was about to die, came to Northern New York State hoping for a a quiet place to see out his last days.  Of course, he lived and founded the sanitarium in 1885 which continued to provide care to people suffering from TB until the discovery of antibiotics.  The sanitarium closed in 1954 and was sold to the American Management Association; I hear it was for “a dollar” and they are not about to sell it back to anyone even if inflation is taken into account!

Three generations of Trudeaus continued to live in Saranac Lake, working as physicians and researchers with their legacy continuing through the Trudeau Institute.  These days, Garry Trudeau, great-grandson of Edward Livingston, continues this history of community support with nudges at the US Administration’s approach (or lack thereof) to returning veterans through advocacy and his comic strip, Doonesbury.  Now, along with a number of other stakeholders, Trudeau is tagging Saranac Lake to be the home base for revolutionary treatments for PTSD and the other invisible wounds of war.  If “(h)ome is where one starts from,” he is arriving at his beginning; and, I sense, it is with the same hope that others can make that transition from dying to living.

Hope takes time and effort to fulfill itself.  And first, it needs to surrender to what is.

And then more.  To heal requires a precision, a willingness to be opened at the exact place of the woundedness.

The wounded surgeon plies the steel
That questions the distempered part;
Beneath the bleeding hands we feel
The sharp compassion of the healer’s art
Resolving the enigma of the fever chart.

And one more:  In the face of the enormity of suffering we must face, we can only meet it one person at a time, one moment at a time, one breath drawn deeply after letting go.  Eliot wrote of the potential of the English communities surviving World War II:

In a letter dated 9 February 1940, Eliot stated, “We can have very little hope of contributing to any immediate social change; and we are more disposed to see our hope in modest and local beginnings, than in transforming the whole world at once… We must keep alive aspirations which can remain valid throughout the longest and darkest period of universal calamity and degradation.”

The buildings on the grounds of the sanitarium are a mish-mash of architecture.  A stone chapel sporting Tiffany windows with an unidentified little dog in one corner gave rise to animated conversations over dinner one night.  The main lodging with its “cure” porch and cottages pierced with numerous windows now blindly stare into the sunshine.  I wondered about a real estate notice that described a nearby cottage for sale as having a Cure Porch.  It’s the enclosed wrap-around porch in which (on which?) patients sat to take in the healing air and scenery of the Adirondack Mountains.  The name lingers well after the death of the disease – a testament that legacies create their own survival and are non-preferential too. 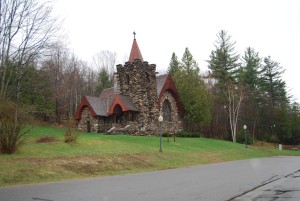 So many things live on in some form, seemingly independent of our wills, wishes, and wanton desires.  I can’t resist my self-centeredness so will say we had a chance to share a meal with Garry Trudeau and his sweetly flamboyant step-mother at what is likely the only decent eatery in Saranac Lake, the Blue Moon Café.   Safe to say that after it was clear we were not about to become part of the great machinery to ply steel into the distempered parts of the Veterans’ Administration, I will not be living on as a character in Doonesbury any time soon!

It is, perhaps, a hope that is for the wrong thing.

Nevertheless, I learned something that evening about what animates history, belonging, and longing.