Things have flown by in a blur over the last few days.  Kid and Cat moved in and my meticulous schedule of procrastination has been irreparably dented.  I think I’m back.  And that is the eternal problem, isn’t it?  I think.  And as for the “back” part, when will I learn that I was never anywhere but here so there’s no “back” to back into?  Other than these mental flappings of my cognitive wings, it’s been quite a lovely holiday… so far.

I’ve spent a bit of time wandering over to various blogs.

Over the last few months, there hasn’t been a spare moment to enjoy the amazing authors and their wisdom.  In fact, there’s been precious little time to develop my own writing – leaving me to even wonder if I can keep up the pace of a daily missive.  Of course, when I do read the H-core Zennies, I begin to wonder what the heck I’m doing trying to translate my practice into words.  Is this Zen?  Is this practice?  Is this worth the nanosecond keystroke?  But beyond the usual self-flagellation for low self-worth (a sure cure for poor self-esteem, I tell you, is to beat yourself up silly and then eat chocolate), my reflections on blogging are still positive.  It has to be.  It’s the only goal in my Initial Learning Plan for chaplaincy that is being met.  Goals 1-3 are trashed and that will be chaff for another grinding.

So.  What’s been happening?  For the soul, Santa Jizo dropped off a few books for me to chomp on over the holidays: The Work of the Chaplain (nice documentation but little soul), Unlimiting Mind by Andrew Olendzki (nice review over at NellaLou’s; looking forward to it), and Great Doubt (mentioned in passing here a few posts ago; so far a bit disappointing but it’s published by my OI dharma sister and brother so I’d better be nice).  The Kid gave me Everything is Broken by Emma Larkin – a tale of Burma’s tragedy and farce.  And she gave me something else that will take a bit of consideration before I post about it.

For the body, I got a gadget.  A new breadmaker that makes breads in traditional-shaped loaves.  If you’ve succumbed to the production of bread via Teflon blades and preheat cycles rather than the intense tactile kinesthetic process of muscling dough, you know the problem with most bread makers is the tall, impossible to slice or store shapes dictated by the form of the machine.  No longer! 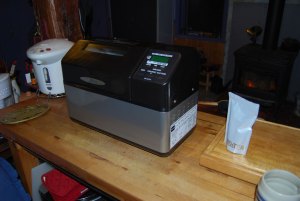 Meet my sexy, sleek new love.  It’s got a zillion bake cycles and three memory storages for my favourite things.  Frank still out-performs it in the memory-for-my-favourite-things department but really, this baby puts out for Mamma.

Christmas lunch was planned to be simple because we were bringing my Mum over for the first time in a year.  We were anxious because getting her to cooperate with dressing for outings has been hit-and-miss for a long while.  Her dementia has progressed sufficiently that the usual “hooks” don’t work.  But I was going to take an optimistic approach and prepared veggie “meat” pie topped with mashed potatoes which were laced with cambozola cheese chunks and served with hot cornbread.

Having been experimenting with gluten-free recipes, I threw together a cornbread mix in the old bread maker.

There’s a very brave woodpecker out there who has my eternal love.  Failure only means you have to modify the recipe in a different direction.  But the lunch being the next day, I opted for a tactical retreat.  My tried-and-true gluten-and-fat-laden Southern cornbread! 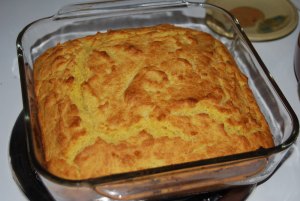 There were no complaints except from the juncos and chickadees who felt Woody was hogging the hanging loaf.

The next day I took a test drive with my new buddy.  A Zojirushi bread machine with enough gearshifts to deal with the temperamental curves of GF baking.  Look at it!  Doesn’t it make you weep?  A Poppyseed loaf – it lasted a day or two. 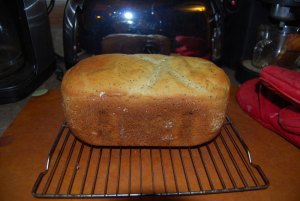 For the spirit, I got this: 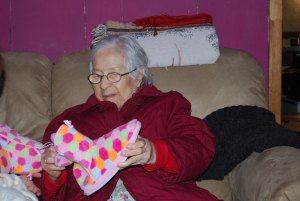 This is Mom.  I just missed a shot of her trying on the slippers as mitts.  Unlimited by form, a true practitioner.  Dementia does that, I suppose.  Cleaves off the complicated parts of our mind and leaves the barest minimum.  Although I would wish that some of the necessary pieces were still intact – like certain memories.  But then, maybe that’s not really necessary either: 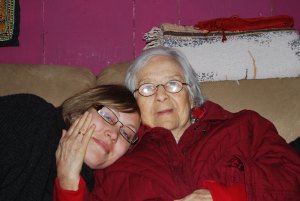 It’s all a matter of getting the right ingredients, not letting the recipe rule, and finding the right combination of warmth, leavening, and letting go of what shape you want it in.