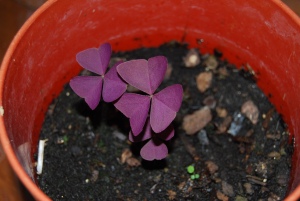 This is an oxalis, a plant I bought for my father when he returned home from the hospital after his first round with cancer.  Mum planted it in the pot which she placed in the garden.  It flourished under her care and when we had to move her things out of the house, I took it home.  Here, it disappeared into the earth despite all my ministrations.  Once in a while it would send out a leaf or two.  Sometimes even a flower would bloom tentatively.  Then, as if the environment was too strange or too demanding, it would go to earth like a wounded animal.  I tried everything: water, no water; inside, outside; fertilizer, no fertilizer.  Finally I gave up and, unable to toss the earth from my parent’s home, simply left it alone in the pot.  Sometimes, it sends out a leaf and there is no rationale to explain its cycles.

I learned quickly that living well with Fibromyalgia meant living with a deep not knowing.  There were days when my body functioned well and days when it didn’t.  At first, I tried to find the transitions and derive the Theory of Getting Better from it.  I was convinced that there had to be a cipher which would unlock the secret to the random patterns of disease and recovery.  But like the oxalis, nothing seemed to fall into a recognizable pattern.  Except one.

Each time I felt well (relative as that was), I did more.  The piles of laundry, cleaning, reports got attacked.  The hours not spent at the gym got logged in.  And the next day I collapsed for longer than I had been diseased before the wellness struck.  Now, I pride myself on not being a Bear of Too Little Brain but it seems I might be at least a Bear of Some Lacking Brain.  It took me some time to figure out that my acquisitive approach to recovery was causing the crashes.  In parallel to this roller coaster of disease and recovery, I was becoming more attuned to the real lessons of meditation practice.  As I sat with each moment, I noticed that when I stopped struggling with the Grand Question of Why Did “This” Happen, I was able to feel the drivenness in my gut.  Breath after breath, it surfaced in my awareness that I was creating the conditions of an unpredictable, unreliable life.

In and of itself, the capacity to push past and through things is not necessarily bad or wrong.  It’s what gets us from point A to B, from cave to city, from microbe to medical miracles.  This drivenness, however, was a skill gone wild in my life.  Like an attribute cancer, it was creating more dis-ease than ease.  Conceptually, I was cultivating a sense of entitlement to things, activities and ways of being in my life.  That entitlement fueled the greed for something other than what I had and sustained my craving for I used to have.  Believing it was my right to feel better than I did, I pushed constantly and hard every chance I got.  On the functional days, two things happened: I took it as a sign that I was on the mend and wanted the next day and every day thereafter to be, not the same, but a steady climb to full recovery.  Or, it became a promissory note that I could buy back what I used to own.  What was really happening was different.  In my drivenness, I was moving so fast to some fantasy endpoint that I was blasting past the moments of wellness that visited me.

Greed to re-acquire what I thought was lost and to have more of what I tasted too occasionally played a powerful role in sustaining my dis-ease and what I had to learn was that it had no impact on my disease.  In other words, whatever lifestyle I managed to acquire – rich, poor, illustrious, ignoble – I would still contain the misfiring neurons, the wonky pain receptors, the uncertainty from moment to moment, breath to breath.  This was the life I now owned.  This was the life I embodied in the very truest sense of the word.  I was up to me to decide how to meet it on its own terms.

9 thoughts on “only this breath”