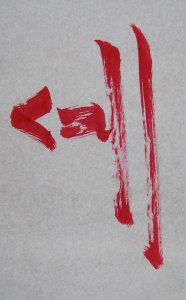 We’re continuing with the second point in Karpman’s Drama Triangle, the role of the Persecutor/Perpetrator/Aggressor.  This can be the initiating point of a relationship or can be a role that one takes on to intervene in a situation.  In relationship with parents or supervisors, for example, we might have no choice in finding ourselves in an authoritarian relationship.  While it doesn’t mean we therefore are victims, it does open the potential for a victimization process if the authority figure is driven by their own needs.

Exploring the triangle gets complicated if I try to deal with it from a victim-perceiving-aggressor or victim-perceiving-rescuer angle. I think these perspectives dissolve when we take radical responsibility of our actions in each role. Because the object is to look at the potential for transformation when we fall into these unskilful roles, I’m choosing to move into the relational process from the vantage of each point of the triangle.

The Aggressor role is a powerful position because it is filled with high energy, directed at an outcome. As with the Victim role, it is important to move away from seeing this as a fixed self-role and to look at the intention of the Aggressor role. It can intend to be protective, motivating, shifting, dislodging, or any of a number of desires to bring energy into a system that may be stuck. When engaged skilfully, the energy can move a process; when unskilful it can become a need to control the other person. The foreground practice for transforming the Aggressor role is Compassionate Action, one of the Three Tenets of the Zen Peacemaker.

During the retreat, we shared an incident in which we had been so unskilful that, despite our best intentions, we had done damage. I joked in our small group that my life had flashed before my eyes. Perhaps it wasn’t much of a joke.

I shared about a time in sangha when I felt we had slid into complacency and sloppy practice. In a previous sangha, I had learned and taken on a deep appreciation for the sacred in every action. Laying down mats, placing cushions, setting up the altar were all done with gentleness and quiet appreciation. All this was with the intention of settling out a sacred space in which we could deepen our practice. In this new sangha, as we became familiar with each other, our actions became inconsiderate of that intent. Cushions were literally tossed across the room, mats were askew on the floor, chairs dragged and practitioners slouched or slept through the meditations. And it had expanded beyond the set up into the program itself. We would agree to use a book as a contemplation guide or a series of talks; however the books would not be read or the talks not attended.

When I spoke with the core members, the feedback was that they just wanted a place to meet “nice people.” Frank and I were at a loss. Being the more energetic and passionate about developing a practice community, I took on the role of conscience – an arrogant position that doomed the enterprise from the outset. When we were setting up, I’d remind everyone of the need for mindful movements; when I lead the meditations, I would insert reminders to sit up. And so it went. But the more I pushed, the more they resisted. The more we talked about it, the more confused it became. New members didn’t seem concerned but the core members felt a new agenda being foisted on them that they had no part in developing. I felt we had become stuck in habits that encouraged complacency rather than commitment and got stuck myself.  I missed their fear of not being able to meet the standards they perceived in the “rules” and hurt at not being included in what they saw as a new process.  Looking deeply into my actions, I saw that although my intentions may have been to foster the growth of our practice, the energy I brought to the system was not the right form or intensity. Not only had I missed their fear and hurt, my actions had not been compassionate of their need to move slowly into what they viewed as new forms or to want something different.

Using the Dharma Triangle, the Aggressor role can be seen as a process of advocating for the quiet or silenced voices in the system; that means being sensitive to the reasons those voices may be silent. Fear, inadequacy, and a number of self-blame/shame emotions keep us from asking for what we need, keep us stuck. When we engage with Compassionate Action in advocating for these unspoken needs, we transform not only ourselves but the system itself. Just as our Victim role is transformed by seeing our suffering and bearing witness to that suffering, our Aggressor role is transformed by bringing energy into the system with compassionate care for ourselves and others.

Bearing Witness to the layers of suffering in sangha, especially when we meet in Council, has been critical. And, of course, when we deal with a multiplicity of roles and desires, being willing to live in Not Knowing is important. However, when we’re in the position of activating change – whether it is designated, requested or taken on – ensuring our engagement is through Compassionate Action has to be the foreground practice.