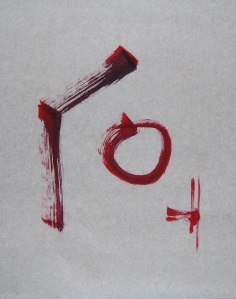 Karpman’s Drama Triangle tends to pivot around the Victim role with the Persecutor and Rescuer emerging to meet the Victim’s needs.  It’s important to repeat the caveat that there are times when the Persecutor creates a Victim and nothing in this process suggests anyone who feels victimized is being blamed for it.   In fact, it’s trite to suggest that the way to stop the dynamic is for the Victim to stop being a victim, the Persecutor to stop persecuting, or the Rescuer to stop rescuing.  The relationship between Victim and Rescuer/Persecutor is one of pathogenic hope – a hope that one can be lifted or pushed out of one’s Suffering but which requires the Rescuer/Persecutor to play out a fixed role.  As I suggested yesterday, it’s not so much about roles as it is about honouring the true intentions of each person in the relationship and engaging in the practice of Bearing Witness, Compassionate Action, and Not Knowing to transform our relationships.  I’ve chosen to use a deeply personal example in the hopes that it explores through the Dharma Triangle how Bearing Witness to one’s suffering might transform a toxic relational dynamic.

Not long enough ago, I sat across from a friend of many years, emptying my heart of all the pain it had carried for as many years.  I described to him the feeling of being on a swaying bridge, trying to get across, and needing someone to call out encouragements and even sometimes guidance.  Knowing his tendency to become a Rescuer, I was also trying to get across the idea that I didn’t need anyone leaping onto the bridge to carry me off, an impulsive act that could well have both of us tumbling into the abyss.  There was a pause in our conversation and he said (typically), “So, who’s there for you at the end of that bridge?”  The question was not the problem.  The long unwavering eye-lock that practically had the answer scrolling across their vast blueness was.  I was taken aback; this was a huge and dangerous shift in our relationship.  Yet there was a deep longing to throw caution to the winds and read the scrolling script.  I took a deep breath, gathered all my loneliness and pain, and said, “No one.  It can’t be anyone but me.”

He pushed back from the table and glared angrily out the window, “Maybe you need to talk to your girlfriends.  This is so like you.  As long as I’ve known you, you’ve always been like this.”

For the next 6 months, as he danced between Rescuer and Persecutor, I fixed into the Victim role.  Any attempt to speak to the truth of what was unfolding was met with anger and blaming which I took on as my own unskillfulness.  Eventually, I knew the relationship had to end but also wanted to salvage it.  The pain of the potential loss of a long-term friendship was intense and suffering grew out of wanting and not wanting.  I sat sesshins feeling that profound sorrow and in dokusans searched for concrete answers.  It was a struggle to let go of the role and look into the process.  Is there a victimization process going on?  Sometimes there is and that has to be directly addressed.

After repeatedly observing the dynamic, I realized I had to bear witness to the process of suffering without stepping into the Victim role, being swept away by it or by assumptions about any character flaws.  I needed to be present to what was happening without manipulating or diverting the experience.  I came to see that my intention in sharing my pain with him was to have that pain acknowledged.  I could see that his intention was to shake me out of my helplessness, a strategy that had been the trademark of our relationship.  And the process of losing sight of those intentions was the cause of the pain we felt.  I could only sit and watch that pain rise and fall, recede and overwhelm me.

The process of bearing witness didn’t stop with the end of the relationship.  In fact, I think it only truly began when he was no longer a part of the triangle.  The deeper process of bearing witness to my pain continued for about a year as I sat with the grief and loss.  I vacillated between seeing both of us caught in the victimization process and feeling a Victim.  Doubt expressed itself in pitiful questions: If only I had… What if I had… Why didn’t I… Who would ever…  No one ever…  Bearing witness meant honouring what was happening in the moment.  It meant not running away from this edge by giving in to the self-blame, the urges to call, ask for reconciliation, or some other distraction from the pain.  It meant feeling the aliveness of the pain in me, noticing how its power could create something profound as well as something dark.  Only by willing to be present to the pain could I discern between forcefully holding to labels about me and advocating for a more compassionate view of myself; between rescuing as distraction from my pain and guiding myself through the pain.

More important, because the loss was relational, I had to look at my own dynamic in relationships.  Not only did the healing require me to engage in advocating for my own well-being and guiding myself gently out of the swamps of self-blame, it also required that I find companions who were strong in advocating for and guiding me when I lost the means of honouring my intentions or wandered away from the path.

All three tenets of the Zen Peacemaker are applicable when the victimization process is active.  Compassionate Action and Not Knowing are important components.  In being present to suffering, Bearing Witness takes the foreground and honours the intention of having that suffering seen and heard.