Disclosure: I was provided the book for an honest review.
Connection: Rafe Martin is in my social media circle and I’ve likely known him in some Jataka Tale or the other.
Previous reviews: Endless Path – Awakening Within the Buddhist Imagination: Jataka Tales, Zen practice, and daily life

Rafe Martin adds Before Buddha was Buddha: Learning from the Jataka tales to already prodigious library of mythic tales drawn from the Buddha’s past lives. The morality themes in the stories resonate with other morality tales from the same period such as Aesop’s fables. The primary – and crucial – difference, however, is the portrayal of human frailties: animals typically carry the tone of moral decrepitude in the Greek and later Renaissance fables whereas, in the Jataka Tales, the moral lack is equally possible in humans as in animals. Perhaps this is the deep appeal of the Buddha’s past lives and its potential for discomfort; we are not spared painful lessons by being at the top of this food chain.

In the introduction, Martin offers one of the least addressed challenges to Prince Siddhartha Gautama’s sudden realization that aging, illness, and death occur. Not only quietly challenging this hole in the plot of the Buddha’s coming to be, he also offers the insight missed by many others: it’s the felt sense, that deep embodied realization of the reality of aging, illness, and death that wakes us up. It’s the beginner’s mind of all beginnings. The familiar, the taken-for-granted, the obvious is inescapably real.

And the rest, as is often said, is commentary.

The heart of the Jataka teachings is that this human birth is precious. And the rhythmically pounding message is that it’s not the final destination. The animals in the Jataka tales are by turns blind and aware of this message. Their actions move them in the direction of becoming human; whether we choose to see it as rebirth or realizing their own-form compassionate nature depends on our own landscape. The naga king who chooses to become the silver snake, the monkey king who sees through the delusions of humans and their self-making, the two cousins reborn over and over as fawns and osprey – they begin to understand that the path to liberation is through the human birth and.

Yet, I wonder if that idea has a risky edge of elevating our human capacity above the others. Perhaps it doesn’t matter because the human lives lived by the future Buddha in the Jataka stories are equally challenged and, after many, many failed attempts at liberation, seem to finally arrive at the base of the bodhi tree.

Because I’ve felt too many dharma talks rely on students having already cultivated clear comprehension and too many teachers presume vicarious learning suffices, Martin’s commentaries for each Jataka tale are important to read because they offer a clear perspective of the intent of the tales. As we learned from the Zen story of Gutei’s finger, much can be lost in translation. Martin skillfully draws from the teachings of Zen masters and threads together the sometimes elusive morals in the tales. As he emphasizes in the tale of the Bodhisattva Robber, it helps to know what is really being taught.

I read each chapter as a bedtime story, letting the echoes carry through me the next day and the days after. It’s not about savouring – although there is that too – rather, it is about letting the nuances fill out the spaces between sleeping and waking up. I hear in Martin’s writings, always, the urgency to wake up, “like the dragon when he gains the water, like the tiger when she enters the mountain. (Dogen)”

A confluence of events that appear to cancel each other out has left me with a bit of a mash up post. Frank & I are in an Advent pattern awaiting the arrival of our first Grandchild, nominally referred to as The Gr’Kid, Child of The Kid. I suppose that makes us Gr’Pa & Gr’Ma and you psycho-analytic folks can tell me why I refrain from the prefix “Grand.”  Likely “Grand” is quite the misleading handle because my Grandiosity in asking that this child not arrive at a time that disrupted my plans for Summer Practice Ango and Rohatsu were resolutely ignored.

It’s an interesting time, this blossoming of a branch in the ancestral tree. Becoming part of the Elders, adding to the Ancestral Lineage is not quite what I thought I’d be doing at this age and stage. Then again I have no idea what I thought I’d be doing other than continuing to make a delicious mess of my life. And that, my friends, is practice. When it can be done by the book, it’s luxurious. It’s a definite luxury to have a dedicated time to get away and hunker down with like-minded souls for this very special time of the year. I’ve always treasured it. But who knows, given all the special birthdays to come with the Gr-Kid, when I may return to that orbit of sitting with a large sangha, leaning into the rising of the morning star. Time to get creative! 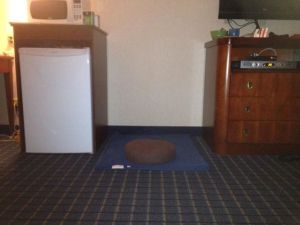 As I write this, I’m sitting cross-legged on a double-bed in a hotel just outside a military base where I will spend this next week working. Across from me, between the TV and the fridge, is a small space in which I’ve placed my zafu on the strip of blanket hotels now use to decorate the beds. There is oatmeal and green tea on the counter. The fridge is filled with food for the week: lunches of couscous and orzo spiced with chorizo-flavoured ground soy. Dinner is set up: veggie biriyani and veggie vindaloo. Keep it simple. No one ever died from eating the same thing everyday for 6 days. (Though my dear friend Barry of Ox Herding had a different story involving lentils on his 100-day solitary retreat!) I’ll be offline from social media and as much as possible off emails. At work, speech and activities will be kept functional (pleasantly so). Meditations are scheduled three times a day or more.

And now, the teachings. The coming of the Gr’Kid opens up a need for stories and my story-telling skills. No, not the story-telling that gets me deluded about my path and practice. The other kind. The kind of story-telling that opens the heart and enlivens the senses. For that we go to Rafe Martin’s Endless Path: Awakening within the Buddhist imagination: Jataka tales, Zen practice, and daily life. How appropriate!

Endless Path is a collection of “original tellings” of the Jataka tales with this compilation reflecting the ten paramitas. This is particularly interesting for me (Gr’Kid notwithstanding) as I was simultaneously slogging through Gombrich’s What the Buddha Thought and his proposal that the Buddha ethicized practice (actually he ethicized karma but practice is karma and vice versa). Rafe Martin is an exquisite story-teller, not only for his transmission of the story itself but for his magical ability to turn us into the storyline. There is no getting away from the ethics that underpin each Jataka tale. And, the amazing artwork by Richard Wehrman is captivating and fires the imagination (also check out Richard’s poetry!).

The first tale is “The Hungry Tigress” and tells of the Buddha’s early incarnation in which he offers himself up to the starving tigress so that her cubs may live. An act of generosity, of selfless giving – dana paramita. Martin’s commentary follows each luscious telling of a Jataka tale. He reaches into a long history of Zen teachings, koans, relationships with his own teachers, and his own practice to draw out the juice of each story. His writing flows like a teisho (some are), it collects in eddies of insights from this experience and then breaks out over that experience. Each chapter, each paramita is a contemplation.

Of course, I have my favourites. The Gentle Heart Jataka taught me aspects of sila (ethics) and informed a talk I gave to our sangha. The Blue Bear Jataka came at just the right time when I needed reminding of forbearance.  Prince Five-Weapons made me laugh out loud (in Starbucks) but I wasn’t too impressed with his stubbornness in defeating the Sticky Hair Monster; maybe I over-identified with him. The Black Hound taught me Upaya or skillful means but I wasn’t too sure how well I’d be greeted threatening to set the pups loose on a village if they didn’t shape up; somehow a bit of street cred would be missing. The Monkey King, Great Joy the Ox, and others gave me cause to re-perceive my practices. Martin’s commentaries offered ways in which that practice could happen anywhere, anytime.

But most of all, what Endless Path teaches is that all the paramitas are but one: dana paramita. We practice to embody dana, to give freely of our time, effort, energy, patience, and love.

So I ask you to take this week, this time that is a time for ripening our practice. Sit where and as you can. Sit even when it seems impossible – because that’s just a story of why we sit. And I’ll see you all on the other side of the rising morning star.