Teaching children is a high-level skill at the best of times: A fine balance between gentle guidance and determination to soften the resistances without breaking the spirit. Teaching the Dharma, while challenging even with adults, seems tricky. At least for me, but I “grew up” with the mythology of Buddhism that was troublingly close to the fire and brimstone of Catholicism. Somehow the stories of parents eating their children as a metaphor for the consequences of destroying our future or Angulimala or Gutei chopping off fingers as a dire warning of how we can be misled by the teachings don’t encourage me to convey the beauty of the Buddha’s mind. So, when an author is able to convey these complicated concepts as their true nature – simple, thoughtful, relational – I’m all ears… and eyes.

In the Garden of our Minds by Michelle L. Johnson-Weider (Blue Moon Aurora) offers a skillful and gentle way to bring the Dharma into the lives of children. Illustrated beautifully by Brian Chen, the book comes alive with vibrant colour in images and language. The stories are rooted in Siddhartha’s journey into his spiritual future and expand into the primary teachings (many are my absolute favourite). Qualities of determination (fighting Mara) and persistence (Mahaprajapait) are showcased through the experiences of Briana and Alex, the narrator’s children.

Alex is a firebrand of emotions; he is, in turns, cynical yet tantalized by new ideas; Briana shines in her curiousity and love for adventure. Mom does seem unendingly patient but perhaps I’m just jealous that she’s gained the fruits of her practice! Dad is easy-going and joins in the story-telling effortlessly. The family’s interaction around everyday chores and relationships are the stage for the Buddhist stories to prompt reperceiving their experiences.

I’ve always wondered how the concepts of death and chopping off fingers as a ritual are conveyed so children are not traumatized. Johnson-Weider does an admirable job of folding these stories into the reality of everyday life. Pets, people, everything in our world dies. Not only do we see people doing things that are harmful, but we are also asked to do things that are harmful. Lessons in Stopping: the story of Angulimala is woven into Alex’s schoolday experience of seeing other children wanting to harm a grasshopper. Briana learns how to stop being disruptive in class even if it’s so hard to do. The Doorway of Death: the story of Kisagotami lovingly speaks to ends and beginnings realistically complete with expected “Ewwws” that Kisagotami would walk around with her dead child.

The book has a useful section Conversations with Children which explains the illustrations of the Eight Auspicious Symbols that head each chapter. It also explains the meditation practice explored in the chapter, In the Gardens of our Mind. In all, highly recommended for parents who want to explore the stories that guide Buddhist practice. Also highly recommended for the child in all of us who want to have a gentle rendition of this challenging inter-relational process we call living with compassion and love. 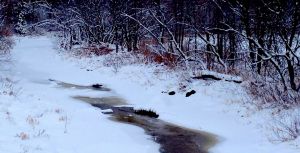 The sun is warming the snow and ice that cakes the lane way and the pups are enjoying their version of a Formula 500 race around the house. It’s quiet. Well, quiet except for the music from Songza – a recent discovery I made that takes the anxiety out of choosing music for various activities in the day and evening. It also seems to render the CDs obsolete though I’m told to stash them away until I truly want to send them along to wherever CDs go when their time is up.

Speaking of which, in teaching about the first precept I’m fond of telling people that everyone has a “best before” date. (Frank often adds, “But better after!”) Embedded in the First True Reality (Peter Harvey’s term) is the painful truth that we are not meant to be around forever. When I work with individuals with a terminal disease such as cancer, I feel a bit of a hypocrite simply because in the face of what they now know, I am still blind to my own “stale date.” Death happens as it has for a number of family members and friends since I last wrote. And those of us here remain helplessly blind to our own biological last moment.

And yet. There is also life. Grandest Baby turned one year old. Born 20 minutes short of the celebrated date of the Buddha’s enlightenment, she has been a teisho on equanimity, patience, letting go and all the other goodies we’re meant to practice. Cultivating grandmother-mind – robai shin – is an interesting practice. May I live long enough to see some buds break through these hardened branches!

Such a desire for sight, seeing, sight consciousness. I’m aware of how much that plays into our interactions. “Can you see what I’m saying?” “I can’t see my way out of this.” “See?”  In a conversation with a colleague, she asked about my paternal grandmother. Did she know, my colleague asked, the impact she had on your spiritual path?

At the entrance of our home in Rangoon on one side of the door was a statue of St. Philomena, a Christian saint with a problematic relationship with the Holy See who bounced her off the liturgical calendars in 1961 but still allows devotions to continue à la St. Patrick and St. Christopher. But such news had not reached us and my aunt in particular remained spectacularly devoted to her. Well, to the statue anyway, as she walked into the house, stood in ecstatic  prayer before it and at the conclusion would touch the saint’s eyes then her own. She believed that St. Philomena would cure her encroaching blindness from cataracts and no amount to explaining that it wasn’t in Philomena’s job description would dissuade her. Blindness, especially one that offered a forewarning of things to come, was terrifying and warranted an appeal to all saints available.

My paternal grandmother would enter the house, first dousing her cheroot in an empty oyster can Dad would leave at the door for such purposes, and turn towards the window. She would sit on her haunches with hands in prayer and shi-ko three times. The prostrations were quick and efficient with no great devotional drama. My memory of her was of an ancient elder though she was likely only (only!) in her sixties. I asked her if she was doing that because she too wanted to prevent being blind. No, she said. She knew she was already blind.

Understandably it was perplexing then. Not so now.

Frank and I and the monstrous pups wish you all a season of enlightening joy. Our metta wish for you is that you are blinded only by the light of your wisdom, that it sears off the cataracts and you lead the rest of us mundanely blinded folk with compassion and love.