It was close. The various plans for holiday celebrations had been set for some time after that psychological window of a snowy Christmas. Still, it was a relief to have a dusting over the landscape followed by a 20-cm literal windfall a few days later. This space between the Christmas and New Year festivities can be trying as much as it can be contemplative. Or maybe there isn’t a difference as I often find the most trying times call for a deepest of contemplations. Of course, deep thoughts in this holiday period tend to have a preamble of frantic decisions over what to serve for breakfasts, lunches, and dinners. How many cookies? What kind? And who-thought-this-would-work types of “discussions”. 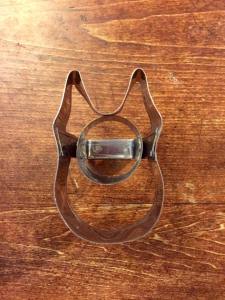 This season, being the 3rd Great Feast of the Grandest Baby, I pulled out the stops on aiming for maximum robai-shin points. (Being only 3 weeks old on the First Great Feast, I figure her consciousness was primed for impression at this one.) Capitalizing on her favourite character, Totoro¹, I scoured the internet (and hundreds of ‘how to ice cookies’ videos) for that perfect Totoro cookie recipe only to end up – happily – making my own cookie cutter out of a donut cutter and using this cookie recipe.

The results were excellent – if one discounts the two attempts to make grey dough that ended up producing 56 cookies, half looking sickly green and the other half mahogany red. Icing is easier to tinge.

This grandmother gig is becoming an interesting thing. Yes, it’s about creating that space for fun stuff and I’ll tell you now there’s nothing like hearing that gasp of awe when the Littlest One recognizes one’s attempts and squeals, “Tot’ro!” And the proof of the cookie being in the eating, it was heartening to see she actually liked the cookie too!

This, however, is also a reminder that the state of robai-shin² can’t settle for the glitter gel or sugar icing coating mis-coloured baked goods. The First Noble Truth of Inter-generational Relationships is that they don’t survive the sugar rush unless there is something of substance in them. The Second Noble Truth of Inter-generational Relationships is that although sugary distractions can bridge gaps, it quickly becomes the addiction we all indulge in: settling for the quick-fix, easy stuff that keeps us seeing only half the life we have.

With the publication of my essay in Lotus Petals in the Snow: Voices of Canadian Buddhist Women³ about my mother’s dementia and dying, I’ve felt drawn into considering this pattern of inter-generational love. My own grandmothers were powerful women: One a devout Catholic who cooked for the parish priest and the other a devout Buddhist who supported the local monastics. The former was a fierce hotel owner who could bargain down any deal to her favour, sometimes to the degradation of poverty-stricken nomadic sellers; the latter a cheroot-smoking dame who had a deadly aim with a wooden clog when disrespected. I can’t see them baking Totoro cookies but my life has been shaped irrevocably by their fierce determination to carve their own way in a time when women were regarded as not much more than the cattle wandering the fields.

My mother was not that different though her relationship with self, others, and the world was a triptych of personalities laid out in highly edited scripts, more nuanced and cunningly aware of the societal demands she fell prey to. She didn’t bake cookies either. But under the rage and disappointments she felt so keenly there was a profound love which sadly could only emerge through the paths she had created by walking out her life. And this is the Third Noble Truth of Inter-generational Relationships: We walk out the paths of our life with those in that life. We are shaped by each others’ experience and carry those formations forward.

When we see that our path which we claim as some individualistic attainment is really inter-meshed with all those before and those to come that Fourth Noble Truth of Intergenerational Relationships has to be a powerful yet simple recipe whose eating will offer proof of the pudding’s or cookie’s ability to nourish.

How can we understand this crimson thread, this bloodline of truth and its avoidance?
How can we create our path with an intention set on cultivating enduring relationships?

How can we action this wisdom through our choices of behaviours, speech, and livelihood?

How can we titrate effort so as not to become depleted or manipulative?
How can we hold in gentle awareness all that has gone before without being weighed down by pathological regret and guilt, yet learning from the paths we walked accompanied by our parents and generations beyond them?
How can we stay committed to our path: focused without obsession or over-control, distilling the essence without becoming rigid or unyielding?

¹ Totoro is a character from the animation My Neighbor Totoro“, a “1988 Japanese animated fantasy film written and directed by Hayao Miyazaki and produced by Studio Ghibli“.

² I wrote earlier about “robai-shin” here, interestingly about recipes there too.

³ To encourage purchase of the book, Lotus Petals, whose entire price is donated to charity, I’ve taken down the original blog post on 108 Zen Books. Please purchase the book here (Canada) & here (US and other countries).