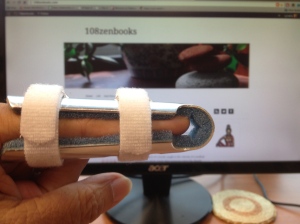 I’m not the sharpest finger pointing to the obvious.

A few months ago, my body and mind decided to separate leaving the Me-Who-Functions-More-Or-Less a bit adrift. Coming out of a restaurant where I was entertaining a visiting lecturer and friend, I tripped on the edge of the raised sidewalk and sprawled unceremoniously into the street. In my pre-occupation with having left my car unlocked (and catastrophic visions of his computer having been stolen from it), I failed to coordinate my foot with an edge I’ve step up to thousands of time – this being my favourite pizza place. Not only had I skinned both my knees but I also sprained the tendons holding my knee cap. Of course, seeking treatment was – and often is – out of the question because… well, because, just. because.

A few weeks later, taking my computer bag out of my car, I dropped it. Being my new MacBook and all, I tried to save it with an open-handed dive only to have the bag, book, and ‘puter trash my finger. Now you would think, “Oh, she’s a smart cookie. Perhaps with two injuries she’ll get the karmic bellow about taking responsibility.” Silly you.

I did eventually go to the urgent care clinic for my knee, only because I thought it was broken and there was a sesshin looming in my future. No, no breaks; just a badly sprained patellar tendon. In my defense, I figured that one hardly needs a knee on a regular basis; it’s more of a perform-on-demand kind of joint. Apparently not. I was also too chagrined by my neglect of life and limb that I didn’t ask about my finger. I still haven’t. However, one of our classmates in our weekly “Train your human to be a good dog owner” class came in wearing a splint. It look pretty.

I sit humbled by the strand of sinew attached to this digital joint, as much for its attempts to communicate with me as for a nuanced dharma teaching on the Second Noble Truth.

We know stuff happens, poop pervades, and disgruntlement is dismally normal. That’s the big NT1 and not only is it True, it is Real. Real because we regularly encounter disruptions, trips, bashed fingers and toes, illness, pain, and loss. These are the sufferings of suffering; the regular stuff we try to avert from, striking a posture of insouciance. Then there is that suffering of change; what was well is now not so well. What was whole is now in parts – or at least stretched beyond its limits. And the suffering that arises out of our tendency to adopt various stances to our experience (conditioned suffering) leads us down pathways seeking a fix-it solution.

It’s helpful to see these three as interdependent and co-emerging. But what is important is not to diminish that “fix-it” tendency especially at the entry-level of suffering. Get the x-ray, get the splint, get the second opinion. That’s simply because when we begin by treating the obvious source of immediate suffering, we defuse the firing of the other two forms of suffering. When we take charge of what is literally and figuratively painfully evident, there is a slightly less possibility that we end up in mental pretzels about our worth or worthiness to be well and whole.

(OK, I’ll admit it. I’ve taken off the splint so I can type this faster. Because. Just. Because.) Now go and find the obvious thing in your life that needs immediate attention and care.

One thought on “treating the obvious”