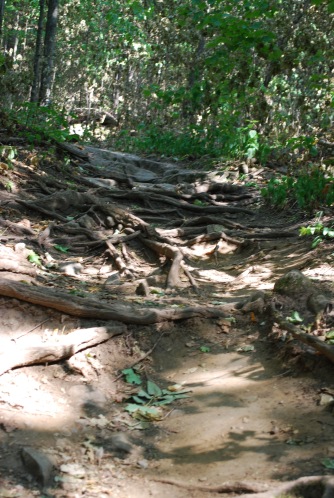 It’s a holiday weekend here and I seem to have lost track of my days.  I’ve been lazing since Friday, enjoying the seduction of the Olympics Games, successfully resisting the urge to weed the gardens, and equally successfully meeting up with sangha friends for a “gentle” hike.

Sometimes I get these interesting notions about doing and not-doing and it’s always a surprise where these ideas take me.  One never knows where the path will lead.  Heck, one can even miss the path for a tangle of roots if viewed from a low angle.

At yoga class, I noticed how close to the surface many of my self-demands, a form of doing, still lie.  That self-judgment is right there, perhaps not as loud or demanding but there nevertheless, available fodder for whatever I’d like to avoid (doing again) at the moment.  In the common parlance of new age mindfulness, someone is likely to step up and tell me just “not do” – often meaning “stop doing.”

It’s an interesting notion that the approach to “doing” is more likely grounded in “doing skillfully” rather than “not doing.”  In meeting the self-demands during yoga class, there is a nuanced difference between setting judgment aside and pushing it away.  Setting it aside requires patience as I put the thoughts that contain concepts of “never”, “can’t”, or “futile” on the windowsill above the yoga mat.  Pushing it away requires energy irrigated away from the flow of practice.  Skillful action is compassionate action and it leads to the real “not doing” – not trying to escape the tension between wise action and reactive responses.

The tough corollary to all this is a willingness to meet words just as they are.  I was reading a note by a famous zen teacher who insisted that the words “successful” and “children” should never go together (and based on that notion refused to read a NY Times article on raising successful children).  I’m hoping she meant this to be a 21st century koan that would activate our enlightenment and I’m equally hoping that most people read that article because it was a good one about parenting styles that are best suited to support a child’s development.

While there are many words that I’m glad are no longer part of common usage, we don’t become stronger in meeting challenges when we avoid words because we fear the opposite.  When we meet them just as they are, we become skillful in cultivating ways to navigate the tough, tangled spaces in our path.  This is particularly important with the words of our inner dialogue.  Whether I’m struggling with a wobbly yoga position, a seemingly never-ending uphill slope on a hike, or a writing project that is daunting in its conceptual phase, it’s not the inner words that defeat me.  It’s the skill with which I use them and the discernment I develop about their power.  At the end of the day, I’d much rather know that I had an interesting notion about “not able to” and that I left them as an offering to a tree on an uphill slope.

2 thoughts on “sometimes an interesting notion”