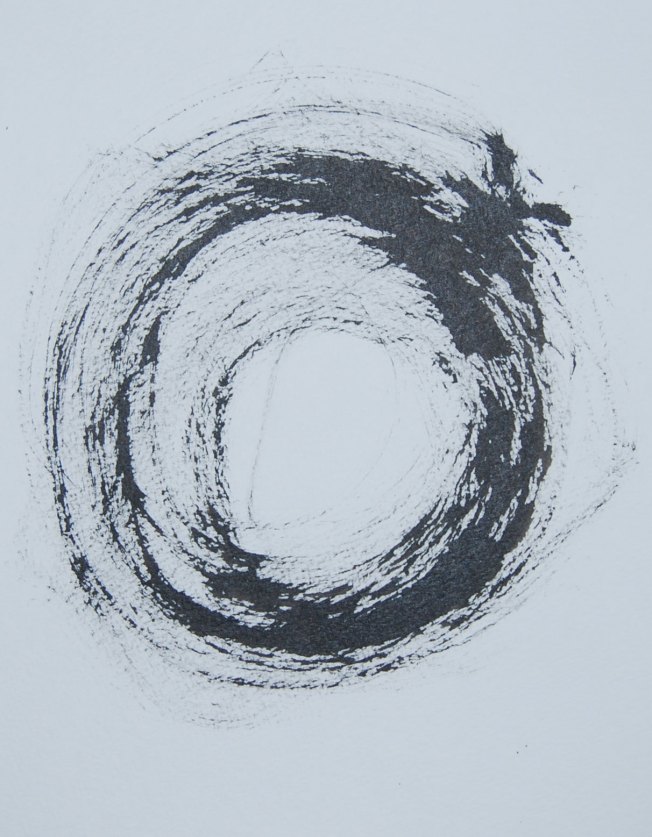 Knots are easy to get into. This enso started with the intention of being what I call a “spatter” enso.  You know, the kind with all that energy thrown across the page.  Chi gone native.  I probably should not be so irreverent because Kaz Tanahashi does some amazing work with “chi gone native.”

My spatter, on the other hand, would bore a CSI field tech.  Yup, looks like the brush dropped here in one collapse of hair and ink.  Nope, nothing in the reservoir.  Seems the alleged artist didn’t fill it up before doing it in.

The reservoir of the brush, by the way, is the thick body of the brush where the ink is absorbed into and “stored” to be released on its path through the brushstroke.  I tend not to fill my reservoir up much; sometimes I claim it’s deliberate – to get that “flying white-dry brush” effect.  Sometimes, I lie.

So I will continue to work on my spatter patterns.  But in the meantime, I should look into this malady of empty brush syndrome.  Empty as in lack – à la David Loy.

Now, I make no claim to understanding Loy; his is one of those minds and thus one of those who can string words together that annoyingly point out all the books I need to read before I can “read” him.  Nevertheless, there are snippets I pick out that I get, if somewhat superficially.  One of those is the idea of constantly chasing after something without any idea of why.  In fact, the chase is so intense that the end is obscured by the means.  Loy’s chapter “Preparing for something that never happens” in A Buddhist History of the West lead me into this thick part of the forest of craving.  Loy argues that we’ve lost sight of the “end” to which the “means” is dedicated.  We study for grades not understanding; we seek merit at work for salary benefits not contributions to community.  And so on.

No wonder I get tied up in knots.  This “endless-means” takes away the ground of practice, of living.  Losing sight of what drives practice makes it tough to track the fuel gauge, to know how and when to replenish.  And when the tank is filled only with fumes and the engine rattles, it’s not long before everything stalls, knots up, ceases.

The solution: Loy says it’s in learning how to play.  This reminds me of my shodo teacher’s ardent plea to my stiff handed brush wielding:  Play!  Play with the brush!  And, playing in circles makes letting go of those endless-means easier.