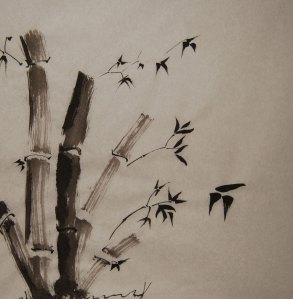 There are Four Gentlemen who have a prominent place in my artistic life – such as it is.  They have been very patient as I wandered various paths of being schooled by the brush.  I’ve appealed to their rules and regulations frequently when sloppiness tried to pass for abstraction.  But I’ve never really become proficient under their guidance.  It’s probably more that I lack actual talent for composition and design than any lack of desire in my heart to be skillful at the formal aspects of brush painting.

The Four Gentlemen are the four styles of brushstrokes: bamboo, orchid, chrysanthemum, and plum branch.  Practising with the  brush strokes that make up a bamboo leaf, orchid, chrysanthemum blossom and plum branch it considered the foundation to learning how to paint in the Oriental style.  Tomoko Kodama, my “root teacher” of shodo, however, noticed that Westerners had a hard time controlling the brush itself rendering the Four Gentlemen more difficult than for her Asian students.  She attributed this to the latter group having grown up using the brush to write Japanese or Chinese characters – which are in fact, the elements of the four primary strokes.

She developed a series of practice strokes using the Roman alphabet – a stroke of genius – and for the past 40 years has been teaching her Canadian students these skills.  You can read more about her on her website; there’s even a DVD – narrated by yours truly.  I spent about 10 years as an inconstant student (only because of the rather bizarre registration policy of the art school which wouldn’t announce when the class schedule would be released until the last minute) and managed to be part of one show at the Japanese Embassy.   I learned from Tomoko how to play with the brush using the lines from both the alphabet and kanji characters, slowly translating them to flowers, people, landscape, and a variety of free form lines.  But the process often left me frozen with anxiety when my eye couldn’t find the lines in the object I was to paint or copy.  At such times, I resorted to the Four Gentlemen and learned how to be in partnership with the brush even if my eye for composition lagged or my impatience created a cluster of chaos on the paper.

Later I studied with one of Tomoko’s students – a brilliant and warm-hearted man whose work you can see here.  Peter encouraged me to stick with a single kanji character until I felt every brush stroke!  Then slowly, painstakingly, he would let me in on the secrets and nuances of how the character deconstructs just enough to create something new, yet familiar.

The 108buddhas have been a journey of melding the teachings of two very different teachers with one single love: the love of a simple line.  And it has been a journey in seeing buddha in all things.  Not that different from my path of practice.

PS: The commonality between the buddha97 & 97a is subtle but they are there – single lines expressing the essence of both bamboo and buddha.  Buddha97b shows the common brush strokes more overtly. 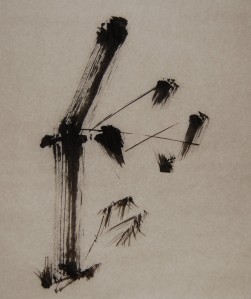