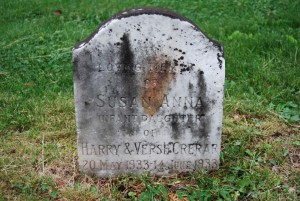 There’s a beautiful cemetery near my office, about a kilometer away, with a botanical garden and beautiful Interfaith chapel.  Strange as it may seem I love taking my friends there for a picnic, which was how it was first introduce to me.  Sitting by the koi pond, sharing sandwiches and salads with a neighbour who worked in town as well, I fell in love with the huge trees, hosta beds, and day lillies.

Later, when I ran out of daring friends, I used the winding paths for my outdoor runs and winter walks.  If I got the pace right, I could cover most of the trails in my 45 minutes of gasping.  Sometimes when Frank would run with me, I reminded him that slowing down in more ways than one would likely delayed our journey to the be the next headstone.

The cemetery is the resting place for many notable Canadians, Prime Ministers, hockey legends, and kingmakers.  There are also military and police members who lie there, many from decades ago left by their families who have long since moved on.

A few years ago, at the end of one of my runs, I stopped to rest on a grassy slope across from the hosta gardens.  Beside me, covered with weeds and overgrowth, was this little gravestone.  It marks the grave of Susan Anna, infant daughter of Harry & Verse Crerar, born 20 May 1933 and died 14 June 1933.  I cleaned away the growth and weeds, brushed off the stone and sat back in wonder at this little life that barely lasted 25 days.  Not even long enough to become “beloved daughter” of Harry & Verse, not even long enough to warrant more than a descriptive with a categorical word: infant daughter.

Over the months, I wrote stories in my head about who they were.  1933 in Ottawa would have seen the 16th season of the Ottawa Senators before they left for 58 years, Cyrville Road was a potato-growing field, there was an increase of 850% in case load at the Ottawa Welfare Bureau, and the charitable organization that would become the United Way was founded.  I imagined Harry as a slight man, likely a labourer who eked out a living working in a bakery or driving a trolley.  Verse, of course, stayed home, holding her grief and sorrow tight to her bosom while making meals, caring for her other children, and cleaning the house.  Or perhaps, they had left Ottawa, the area being to burdened with poor pay and sad memories of their lost child.  I imagined that if Susan Anna had a sister (I never thought she would have a brother), she would now be in her 70’s.  Greyed and slight with a stoop in her walk, she may still come by the grave to remember her sibling whom she never knew or only knew fleetingly.

My breath caught and my heart tightened each time I walked or ran past the little marker.  There were never signs of anyone’s visit and its carved words seem to fade more and more.   I became frightened that, in time, Susan Anna would fade unwitnessed into history.  So my visits became more than an adjunct to my activities.  I took the time to rub the lichen off the gravestone, clear the base of grass and weeds, and chatted with little Susan Anna, bringing her up-to-date on all the wondrous changes in the world since she entered and so quickly left it.  Sometimes, I even tried to explain that her parents and family loved her and perhaps were constrained in how that love could manifest.

I think I spoke as much to reassure Susan Anna that she had been loved as I did to reassure me.

8 thoughts on “a child lost”