Today is 108 days to the first anniversary of 108 Zen Books.  It occurs to me that we tend to wait in anticipation of a celebration rather than beginning the festivities just where we are.  So, here’s a commitment and an invitation.

I am committed to a brush painting a day (small, medium or large) of the Kanji character for Buddha.  Brush paintings of a Kanji character are fascinating in how they evolve depending on script, style, mood, brush and ink.  The formal character is sculpted but the scripts (clerical, running, grass) produce an endless variety.  One of my teachers converted the Roman alphabet into brush strokes on the theory that Japanese artists had less trouble than Westerners in handling the brush for art because they first learned how to wield the brush through writing Kanji.  And, in fact, many strokes in a painting are modifications of the Kanji script for the object being drawn.  All that to say, I am fascinated to see what will evolve as I play with the character of Buddha over the next 108 days – literally and figuratively.

I invite you to find something you can commit to on a daily basis for the next 108 days.  See what evolves.  It can be anything:

recycling one thing you might not usually
planting a seed (literally or figuratively)
drawing a picture
taking a picture of one thing or many things
donating a dollar
building a lexicon of compassion one word a day
smiling with intention
sitting zazen (it’s been blogged)
doing one prostration
doing one move of the 108 tai chi moves
writing one letter or sending a card to a prison inmate, someone who is dying, sad, alone
making peace with each person, thought, or feeling 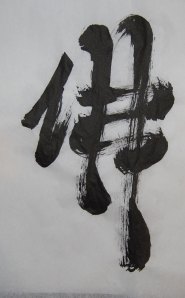 Thank you for joining in,

PS: I have no idea what I will do with 108 brush paintings of Buddha so if anyone has ideas, let me know!